So, you still love your ex girlfriend and are dying to know if you can get her back?

Well, you came to the right place!

Today we are going to be talking about how you can get your ex back.

But I want to do it in a very unique way.

Are you familiar with the idea of reverse engineering?

The dictionary defines “reverse engineering” as,

The reproduction of another manufacturer’s product following detailed examination of its construction or composition.

Basically business use “reverse engineering” to understand how their competition creates products.

Now, what does this have to do with getting your ex girlfriend back?

I think it’s important to start with the end goal in mind.

So, your end game is to get her back and in order to do that we have to find a way to make her fall in love with you again.

You are going to do that in two simple steps,

Are you ready to learn?

1. Understanding Why People Fall In Love In The First Place

What is love to you?

And if you answered with this I’ll be disappointed,

I’m all for being poetic and philosophical when it comes to love but usually reciting poetry doesn’t win an ex back.

(And if it does it must have been one hell of a poem.)

Scientifically love is nothing more than the chemicals that get released in your body,

But what processes cause those chemicals to be released?

Well, that’s really where things get interesting and that’s what I’d like to spend most of our time talking about today.

Ultimately if you were to map “love” out it’d look a little something like this, 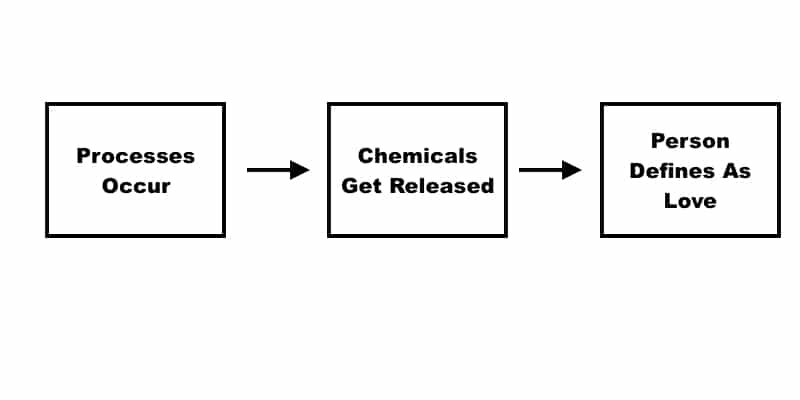 I’d really like to focus on the “processes occur” portion of that graphic because ultimately that is what will release the necessary chemicals to get your ex to fall back in love with you.

What Process Have To Occur For An Ex To Fall In Love?

What if I were to tell you that there are typically eleven things that we can look at to determine how human beings fall in love,

So, I don’t want to go overboard with this since there are a lot of processes to go through here but I’d like to expand a little on each one of these eleven.

If you’ve been around the site you may have noticed that I like to quote a movie called high fidelity a lot.

In it the protagonist goes on this long rant about how he is so good at getting girls into bed.

Now, the philosophers and poets will have you believe that love transcends something as morally suspect as that statement but in my experience it doesn’t.

Whoever said that opposites attract was wrong and science backs it up.

The truth is the more you share in common the more attracted you become to someone else.

Let me ask you a question.

Who do you think your more likely to fall in love with?

Someone you just met?

Someone you’ve known for months?

Yet another myth I intend to bust is “love at first sight.”

While I won’t outright say that it’s impossible I don’t believe it’s likely.

Generally speaking we tend to fall in love with those that we are more familiar with.

They say that within the first 90 seconds of an encounter you can tell if you are attracted to someone.

Now, I am sure that there is more going on behind the scenes to develop an attraction than just physical appearance but it does seem to be a pretty large part of the equation.

A few years ago I wrote an article on the sister website to this one, Ex Boyfriend Recovery called “The Ungettable Girl.”

In it I mused that people sugar coat the truth of the world.

And that truth is that men and women aren’t created equally.

Women are more likely to be drawn to this, As opposed to this, You can’t help how you look. It’s one of those things that you truly have no control over.

I’ll admit that this one shocked me.

So often women think about what they can do to show you that they love you but it also matters that they feel that love reciprocated.

For example, if your ex girlfriend gets you a gift and you thank her for it you probably leave the interaction at that.

However, it would actually benefit you more to reciprocate with a gift of your own a few days later.

Contrary to popular belief it matters what your friends and family think of your partner.

I’ll never forget when I was in high school there was a girl that I thought was unattractive. Ok, maybe not unattractive but I thought she was below my standards.

However, my best friend at the time had a HUGE crush on her.

Because he had this crush my perception of her changed,

Wow, actually she might not be as bad looking as I thought.

This is social influence in action.

To be quite honest with you this is one where I feel I am not going to have to explain too much.

If you are good a fulfilling someones needs in a relationship.

They will probably grow more attracted to you.

This is my personal favorite one because no one really considers that environment can play a pretty huge role into how someone falls in love with you.

Case in point: The Bachelor

You have 30 women competing for one man.

He goes on dates with them in arguably the most romantic places on earth.

What do you think happens?

They begin to fall in love with him.

And the crazy part is that the environment plays such a huge role into this development.

This one is kind of interesting.

Did your ex ever mention that she was specifically attracted to a particular feature of yours?

One of the best ways to ignite passion with your ex is to find a way to highlight these features that she liked about you.

You want to know the mistake I see most men making?

They try to rush into getting their exes back immediately after the break up. This is a mistake because their ex probably isn’t ready.

Timing is one of the most important aspects towards getting your ex girlfriend back.

And research suggests that it is one of the most important aspects towards making someone fall in love with you.

Something tells me you aren’t going to have a lot of success making a girl feel love right after her father dies.

How much alone time you spend with a partner directly impacts how they feel about you.

The more alone time you spend with your ex the better

This one isn’t exactly rocket science.

Well, the dictionary defines it as,

Something that is difficult or impossible to understand or explain

Have an element of mystery in a relationship has been linked to love.

And often that mystery directly correlates towards your partner not knowing how you are feeling or what you are thinking some of the time.

If you want to learn more about this concept I highly recommend you read this massive guide so that you can fully grasp how powerful it can be.

2. Reverse engineer that knowledge so that you can use it on your ex

Did you know that I have a private facebook group that helps men and women with their breakups?

Originally I started it just for women on my other website, Ex Boyfriend Recovery, but I have since opened it’s doors to men.

It’s one of my favorite things that I do.

Well, because I get to interact on a much more personal basis with people struggling with their breakups.

Wait a second… how do you do that?

Basically I do a live stream where I allow people to comment and ask me questions and I can answer them right there and then.

It’s really quite fun and I feel I really get to help a lot of people.

Yesterday I happened to be doing a facebook live and that’s when I had a thought,

“Hmm… I wonder if should tell the people about what I am writing in this article.”

And for the next 30 minutes I watched as my view count went up and up and up as I rambled on about how to make an ex fall in love with you.

And that’s when something really interesting happened.

Organically I began talking about how we need to reverse engineer this entire process. This is a screenshot of someone who took my words to heart and did exactly what I suggested.

You’ll notice that there are checkmarks next to a few of the eleven qualities.

Those checkmarks represent areas where this particular person felt they were extremely strong in their previous relationship with their ex. Everything that was left blank represented areas of improvement.

Essentially it gives you a list of everything you need to try to accomplish if you want your ex to fall in love with you again.

In other words, by making a list like this and attacking the processes of love we have essentially reverse engineered the entire process of falling in love.

I realize that what I just wrote about here is very out there and you probably have a lot of questions about it. However, I don’t want you to worry because we aren’t going to leave you out to dry.

If you have a question or are confused about anything I wrote don’t hesitate to ask me in the comments.

My and my team will be actively responding so you should get a response!