This may surprise you, but your ex-girlfriend could mean something completely different than what she says. While this may not always be the case – and I’m certainly no soothsayer – we’ve studied the polls and done our research to decipher the real meaning behind what she says to you.

To prepare for this article and answer your questions, I surveyed our large Ex Recovery audience and conducted two polls.

I asked our male clients at Ex-Girlfriend Recovery what ex-girlfriend statements they would like interpreted.

Then I polled over 3,700 women in our private Facebook support group and asked them for the real meaning behind the top five statements our male clients were hearing from their ex-girlfriends.

(I whited out their faces to protect their identities.)

Anyways, the responses came in and I think you will agree the results are fascinating.

But before we get to that we must first take a look at the five most common ex-girlfriend statements  that men wanted to know the real meaning behind.

So, today we are going to decipher what it really meaning behind these five statements:

But, before we dive into the details, the first thing you should always do, regardless of the situation, is figure out if you even have a chance of getting your ex-girlfriend back.

Luckily for you, I’ve put together a special quiz that is designed to answer this very question.

As with any poll, when we asked over 3,700 women for the real meanings behind these top five ex-girlfriend statements, responses varied.

Some women said it meant one thing; While other women said that it meant another;

So, ultimately, to find the most common truth, I aggregated the data to find the patterns based on what hundreds of women said.

When determining what an ex-girlfriend means when she says she has changed, three patterns in the responses emerged.

Pattern #1: Her feelings have changed. She’s not feeling attracted to you anymore.

To put it bluntly, this group of women said it means that your ex-girlfriend’s feelings for you have changed and she does not want to be with you anymore.

Pattern #2: She wants you to change your ways before you try again.

Basically, these women think that not all hope for rekindling your relationship is lost. They believe your ex means that you need to make some changes, before she thinks about patching things up.

Pattern #3: She does not like you that much anymore.

This group of women believe that your ex-girlfriend means she has outgrown your relationship and, as a result, her feelings for you have changed.

Personally, when I look at the data we collected about what it really means when your ex says she’s changed, I think your ex-girlfriend means her feelings for you have changed, because of how you’re acting. In other words, make some changes in your behavior or else your relationship will not have a future.

Now, there are women who responded that do not believe your ex means “or else” when she says she has changed. Many think your ex-girlfriend means she doesn’t like you anymore. However, even in this case, it doesn’t necessarily mean you do not have a chance of getting her back, if that’s what you want. It just means she is tired of your behavior and you need to fix it, which is completely possible for you to do over the next few months.

What does it mean when your ex-girlfriend says that she hates you? Now, I expected the answer to this question to be the most complicated to decipher, but it actually turned out to be the most straight forward.

Almost resoundingly, the women who responded agreed that your ex-girlfriend means one thing when she says she hates you.

It means that she doesn’t like you, but she loves you.

As I have predicted for my female clients when their ex-boyfriends says, “I hate you”, the meaning behind this statement holds true for ex-girlfriends too. Essentially, it is an in the moment reaction to something you may have done that makes them angry.

Do they truly mean it?

Almost all women said no, they do not mean it. They meant it in the moment, but they still love their ex. 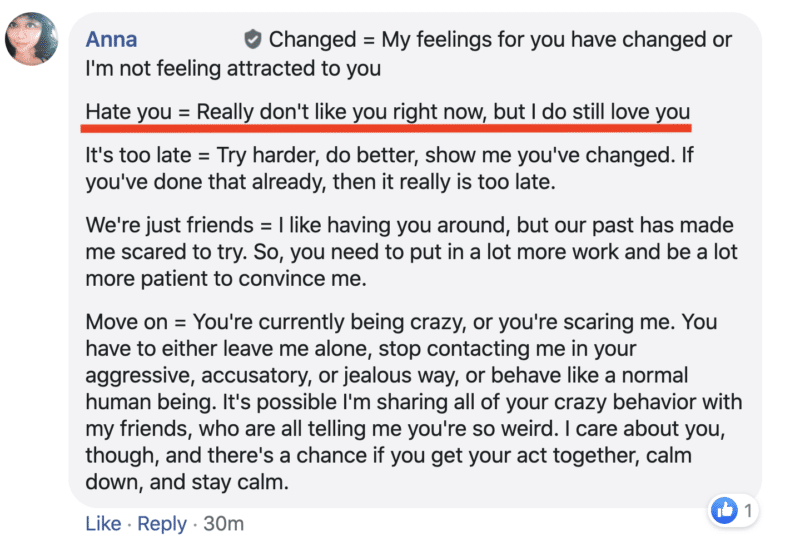 So, I don’t think there is any more to say about this statement other than to tell you not to take it personally.

Breakups are one of the most emotional experiences anyone can experience. If she says she hates you, I will bet she doesn’t really hate you. She still loves you. She may just not like you in that moment.

Now, what does it mean when your ex-girlfriend says it is too late?

I thought this would be the least interesting “said vs. mean” analysis, but it turned out to be the most interesting.

I say “almost” because there were a few who thought it meant something else.

But about 90% of the women who responded to this question said that your ex-girlfriend means she wants you to try harder to win her back.

Maybe even beg a little.

She wants to see that you are remorseful and have changed. 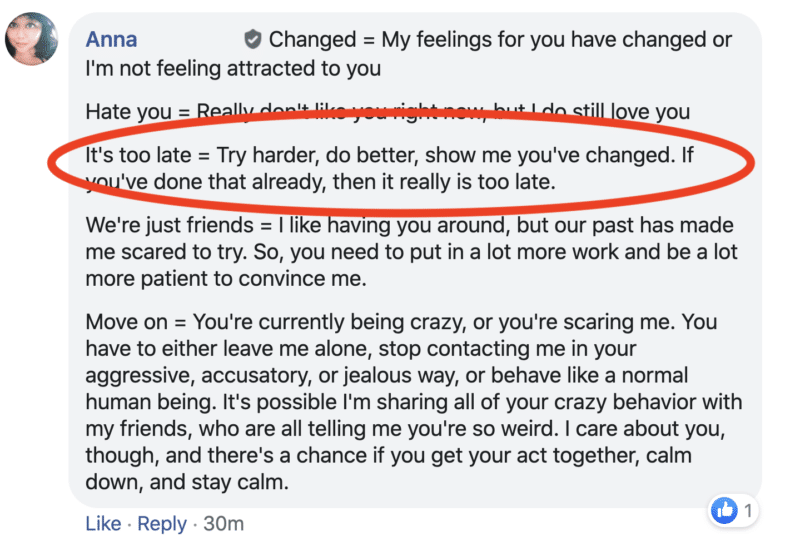 So, in other words, when your ex-girlfriend says that it is too late, it’s actually not too late.

Keep in mind, there were still about 10% of women who responded and thought it meant it’s too late.

She has moved on.

So, do not get too cocky, because you may have one of those exes that actually means this statement.

One way to determine which group your ex-girlfriend falls into is to look at her behavior.

When we asked women what it means when an ex-girlfriend says “we’re just friends” we received a variety of interpretations, which I found fascinating.

I’ll give you a couple of examples.

One woman said, when she made this statement in the past, she meant it, but there was always a way to get out of it.

Another woman said it means there are no romantic feelings towards the relationship, but the ex-girlfriend could still have sexual feelings.

In other words, friends with benefits is possible. Our very own Coach Anna said it means the ex-girlfriend is not attracted to her ex anymore, but she likes his personality.

It’s like she is saying, “I don’t know you well enough to fully trust you with my heart”. 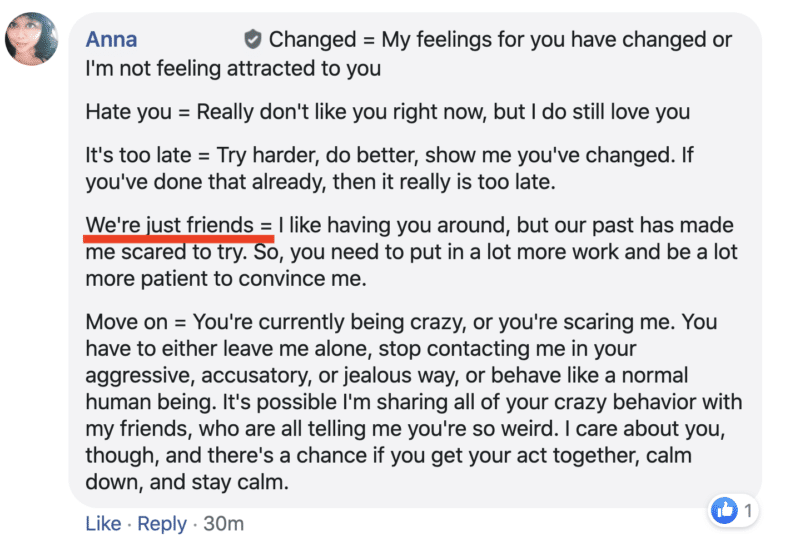 Perhaps the interpretation that I liked the most was from a woman who said it means, “I like you, but I don’t trust you enough to take things to the next level.”

So, you can see there are multiple different interpretations of what being “friend-zoned” could mean. Ultimately, time will be the best indicator of the true meaning.

This is likely the statement you are dying to know the true meaning behind.

What does it mean when your ex-girlfriend tells you to move on?

When we polled women to ask for their interpretation, three camps emerged.

Oftentimes this happens after you have reached out excessively for a long period of time and it has not been well received by your ex.

Regardless of the true meaning, when your ex tells you to move on, the responses show that it’s best to give your ex space and not contact her.

So there you have it!

Now, before I finish this article I want to tell you my plan for it.

I want this to be an article that is continually updated with new insights so that it eventually becomes an invaluable resource to you. I’m a big believer in being able to find real life applications for my thoughts and that’s what I feel we have here. So, I am 100% sure I didn’t dissect every little thing your ex girlfriend says versus what she really meant.

But that’s the beauty of having an audience.

What did I miss?

What are you dying to know?

Leave a comment and if I have time I’ll poll the FB group full of women and give you their real answers!